This weekend (Aug 17th & 18th) was an important day on the Australian BJJ calendar because it was the 2013 AFBJJ-Australian Champions Cup. The Aus Cup is a great event and every competitor is keen to be able lay claim to the title of Australian BJJ Champion.

Congratulations to Harry Caldow on being ISOHEALTH’s newest 2 x Australian BJJ Champion! Harry won every single match by submission in the NoGi Adult 73kg White Belt and also won every match by submission in the Adult Gi 73kg White Belt divisions. Also a huge congratulations to Adam Jones and Lachlan Warne on winning their Silver medals at the Australian BJJ Championships in the Adult Blue 85kg and Adult Purple 85kg respectively. To have only competitors make the trip over to Sydney this weekend and those 3 competitors win 2 Gold and 2 Silver across the Adult White, Adult Blue and Adult Purple Belt divisions is really something special.

Harry, Lachy and Adam love BJJ and they love the Adelaide BJJ competition scene. They have been doing very well here in Adelaide but this was Adam and Harry’s first taste of interstate competition. Lachy has already competed successfully overseas taking Bronze at the San-Francisco International Open and 4th place at the Pan-Ams (the biggest BJJ competition in the world) in a division of 100 competitors so he has the most travel competition experience of the 3 guys.

The 3 guys did great winning 2 Gold and 2 Silver across the Adult White, Adult Blue and Adult Purple Belt divisions. Their results were as follows:

I’d also like to give a special thank you to Jacob Stadder and Steve Bowerman of Gracie Barra. Lachy’s Gi got torn in his first match and the ref said he would need a replacement immediately. Well before Lachy could even have time to stress about it Jacob was already passing him his own Gi, Lachy went on to win that match by armbar. For Lachy’s next match Steve readily loaned Lachy his Gi and who was Lachy’s opponent? His opponent was Jacob! This was some great camaraderie and sportsmanship shown by Jacob and Steve. Thank you so much guys, you are always welcome to drop in to ISOHEALTH if you’re ever passing through Adelaide!

Last but not least I would like to make a special mention that it would have been 4 competitors in there for ISOHEALTH but unfortunately one of our gun Purple Belts (Craig Jones) sustained a broken hand a week ago and was unable to compete. This was really disappointing for Craig as he’s part way through a terrific year. He’s already won 5 State Championship titles in Adult Purple Belt for 2013 including 2 Open Weight Adult Purple Belt State Titles (Gi and NoGi at the AFBJJ SA Championships in Adelaide), his weight class Gi at the SA BJJ State Championships and also both Gi and NoGi weight classes at the NSW BJJ State Championships. It was a real shame for Craig to miss out on competing at this 2013 Aus Cup but he will be back better than ever, we’ll make sure of that!

Once again, congratulations to Harry on being ISOBJJ’s newest 2 x Australian BJJ Champion and to Adam and Lachy on their Silver medals. Terrific accomplishments all round! Great work guys, we are all so proud of you!
Now on to even bigger and better things, these are exciting times! 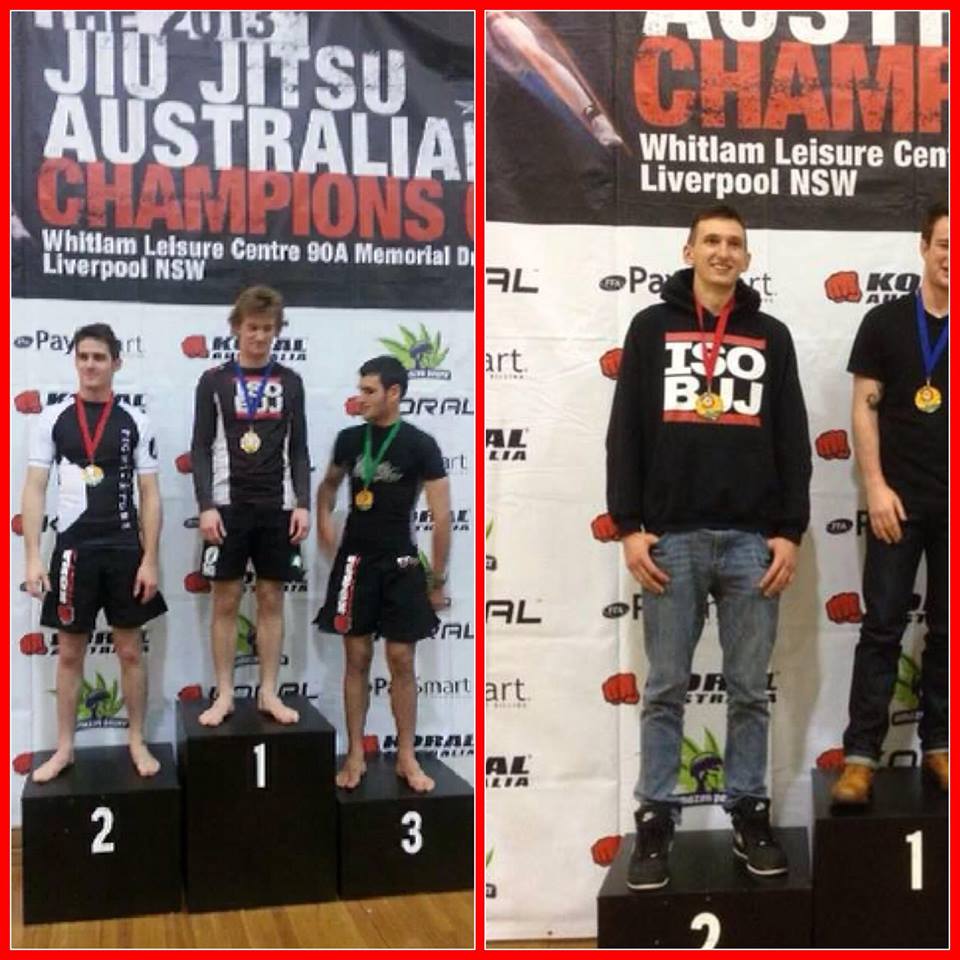